Funny Quotes From Men in Tights

Men in Tights is a hilarious Mel Brooks film parodying the famous Robin Hood. The "Men in Tights" are a funny group of characters set to seek revenge against the false King and restore the power to the people. They fight, sing, and do hilarious things on their path to bringing justice to England. The following are some of the many funny quotes from the movie. 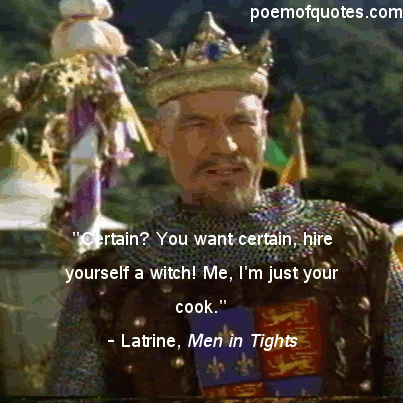 Achoo: [standing by a creek] Look, Robin, you don't have to do this. I mean, this ain't exactly the Mississipi. I'm on one side, I'm on the other side. I'm on the east bank, I'm on the west bank. It's not that critical. Robin Hood: [Robin and Achoo are fight the sherif of Rottinghams men] Watch my back!
Achoo: [Achoo litarlly leans over and looks at his back as a guard punches him twice in the back] Your back just got punched twice.
Robin Hood: Thank You! Prince John: What can you tell me about Robin of Locksley?
Latrine: Robin of Locksley? Robin of Locksley? Hmm, let me see.
[starts cooking up a potion in her cauldron]
Latrine: Raven's egg! Blood of a hen! A little more blood, yes! Eyeballs of a crocodile! Testicles of a newt! I bet he's a transsexual now! Robin of Locksley is handsome and brave. He seeks to regain his family's honor. Little sod could be trouble.
Prince John: Are you certain?
Latrine: Certain? You want certain, hire yourself a witch! Me, I'm just your cook.
[serves contents of the cauldron]
Latrine: Here, eat that. Angry Villager: There must be another way of doing the credits.
Fire Marshal: That's right. Every time they make a Robin Hood movie, they burn our village down! Achoo: [after Blinkin catches an arrow] Blinkin! How did you do that?
Blinkin: I heard that coming a mile away.
Robin Hood: Right-o, Blinkin, very good.
Blinkin: Pardon? Who's talking? Sheriff of Rottingham: [taking off his leather glove and slapping Robin with it] I challenge you to a duel.
Robin Hood: [picking an iron gauntlet up from the dinner table and smacking Rottingham across the face with it, knocking him down] I accept! Sheriff of Rottingham: I was angry at you before Locksley, but now I'm really pissed off!
Achoo: Pissed off? If I was that close to a horse's wiener I'd be worrying about being pissed on! Achoo: Blinkin - what's the fastest way to reach the villagers?
Blinkin: Why don't we fox them?
Achoo: Fox them! [preparing to ravish Maid Marian]
Sheriff of Rottingham: A chastity belt! That's going to chafe my willy! Guard: Robin of Locksley, where is your king?
Robin Hood: King? King? And which King might that be? King Richard? King Louis? King Kong? Larry King? More: Page 2 More Mel Brooks Movie Quotes:
Blazing Saddles
History of the World: Part I
Spaceballs
Young Frankenstein
Last update: 6/11/2020 - 06:22