Blazing Saddles is considered one of the funniest movies of all time and one of Mel Brooks' best. I disagree, but many others think this is true. There are definitely some humorous lines in the film but, even though it's suppose to be making fun of racists, it still comes off as racist. I can't handle the language. However, during the time this comedy was released, I assume it was all seen as in good nature. So go ahead, read on below for some funny quotes from Blazing Saddles. 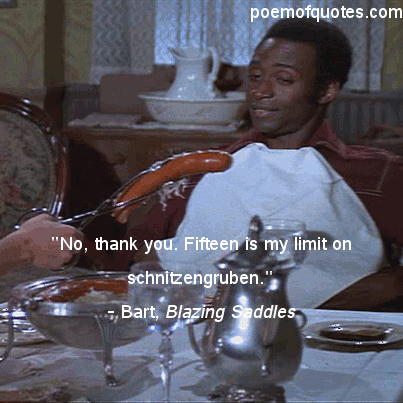 Bart: Checkmate.
Jim: What?
Bart: Checkmate.
Jim: Why, you devious son of a bitch.
[picking up his whiskey bottle]
Jim: Happy days. Hedley Lamarr: Gentlemen, please rest your sphincters. Townsman: [being dragged through the street] Well, that's the end of this suit. [Bart is bidding farewell to the people of Rock Ridge]
Bart: Work here is done. I'm needed elsewhere now. I'm needed wherever outlaws rule the West, wherever innocent women and children are afraid to walk the streets, wherever a man cannot live in simple dignity, wherever a people cry out for justice.
Crowd: [in unison] BULLSHIT!
Bart: All right, you caught me. Speaking the plain truth is getting pretty damn dull around here. Governor William J. Le Petomane: Thank you, Hedy, thank you.
Hedley Lamarr: It's not *Hedy*, it's *Hedley*. Hedley Lamarr.
Governor William J. Le Petomane: What the hell are you worried about? This is 1874. You'll be able to sue *her*. Reverend Johnson: Now I don't have to tell you good folks what's been happening in our beloved little town. Sheriff murdered, crops burned, stores looted, people stampeded, and cattle raped. The time has come to act, and act fast. I'm leaving. Reverend Johnson: Order, order. Goddamnit, I said "order".
Howard Johnson: Y'know, Nietzsche says: "Out of chaos comes order."
Olson Johnson: Oh, blow it out your ass, Howard. Buddy Bizarre: Cut, cut, cut, this is a closed set.
Taggart: Piss on you, I'm working for Mel Brooks.
[Winds up to punch Buddy Bizarre]
Buddy Bizarre: Not the face. Not the face.
[Taggart complies, punching him in the stomach]
Buddy Bizarre: [collapsing] Thank you. [Lili Von Schtupp offers Bart a gigantic sausage]
Lili Von Shtupp: Would you like another schnitzengruben?
Bart: No, thank you. Fifteen is my limit on schnitzengruben.
Lili Von Shtupp: Well how about a little...
[whispers in his ear]
Bart: [shocked] Baby. I'm not from Havana. [to himself, after fooling the town]
Bart: Oh, baby, you're *so* talented... and they are *so* dumb. Page: 1 | 2 More Mel Brooks Movie Quotes:
History of the World: Part I
Men in Tights
Spaceballs
Young Frankenstein
Last update: 6/11/2020 - 06:22