Hitch is a humorous movie about a date specialist. He helps men get whoever they want. However, when push comes to shove, he has problems of his own. Sadly, this movie was one of Will Smith's last movies that were actually good, and it wasn't fantastic by any means. It's funny, but it's not funny because of Will Smith. It's funny because of the situations and the slap stick comedy. Oh well, it still has some great lines!

Read on for some funny quotes from Hitch. 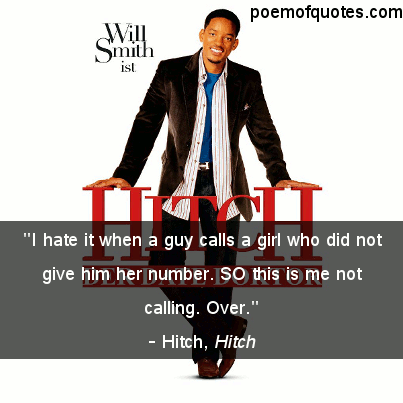 Sara: Besides, relationships are for people that are just waiting for something to come along.
Max: Ah, spoken like a true cynic.
Sara: I'm not a cynic. I'm a realist.
Max: You are a realist masquerading as a cynic who is secretly an optimist. Sara: Casey, you're not sick. You're single. You just have to relax and enjoy the ride.
Casey: I haven't been ridden in months. I hate it when a guy calls a girl who did not give him her number. SO this is me not calling. Over.
Hitch I saw that going differently in my mind.
Hitch Sometimes it's really hard to see the forest through the sleaze.
Sara Albert: Sweet Georgia Brown!
Sara: What was that?
Hitch: No, that's just, uh, some guy screaming. So, my friend, how was she? Pretty good, eh?
Newsguy He doesn't have a badge.
Speed Dating Guy Uh, You almost hit me. Um, look, I just wanted to stop by, basically. Um, see, this is the thing. I, um, uh, whoof. It's wierd. I don't have me behind the door, you know. Close your mouth. Um, 'cause I knew at some point I'd be... you know, right--right here. You know, but I thought that, you know, we'd just ... (makes sqauking noise)... it would just come out, but it's like... (makes tires screeching sound) It's throwing me off.
Hitch You. For-- For a whore lot of reasons that don't make any sence to me. I-- I mean, what, we've been no three dates? But, see, that's what's crazy. That's what's crazy, because I know... I know deep, like just down, just in this area that I just know that I want... I want to be miserable. Like, really miserable. Because, hey, if that what it takes for me to be happy then... Wait, that didn't come out right. That... What the hell is wrong with you?!
Hitch Related Hilarious Movie Quotes:
Balls of Fury
I Now Pronounce You Chuck and Larry
Knocked Up
Last update: 1/22/2020 - 06:22