Poem of Quotes is dedicated to bringing writings (more particular, poetry), quotations and relationship information to the World Wide Web. All writings, except those in the members section, are written by the owner of this site, Gary R. Hess, unless mentioned otherwise. 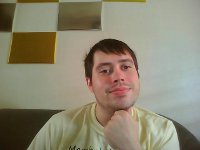 Who is Gary R. Hess?

Gary in short, is me - the author of PoemofQuotes. I grew up in southeast Kansas, USA. Since I was a young boy, I have found a fascination in writing. Although I never found interest in books, short stories and poetry captivated my mind. Ever since, I have been studying authors and their works.

While in highschool I found myself playing several sports and participating in several clubs, but never fitting in. Without close friends and little hope, I filtered the disappointment by writing poetry in my spare time. I believed that living my life through words was much better than living it in the real world. My life moved on, and by the end of highschool I found someone, only to have break my heart later on. Jump several years later, a few heart breaks and here I am. The person who thought he would never live past highschool or find a beautiful woman who loved him. Needless to say, I have been with someone since June 2006 and couldn't be luckier.

With all the work I have done and all the writings, I felt the need to let the world see. After several personal websites on subdomains it was time to move the works to a more permanent place. In the fall of 2004, I began working on a design for a new website. On December 26th that became realized. The website has since grown to several thousand members with thousands of poems from both famous and amateur poets.