Funny Quotations from The Women (2008)

The Women is a 2008 comedy drama film about a woman married to a wealthy financier who cheats on her and so she asks for divorce. The woman then confides in her friends for support. However, one of her friends turns her back on her by giving information to a local gossip columnist. The woman is then fired, but she finds herself opening a clothing design firm and starting a new life as a divorced woman. This movie has several differences from the original, particularly many of the women have jobs and Alex Fisher is a lesbian. Directed by Diane English. Starring Meg Ryan, Annette Bening, Eva Mendes, Debra Messing, and Jada Pinkett Smith. This is a remake of a film of the same name.

The Women received many negative reviews upon its release; however, the film was still a financial success. The movie is noted for only having one appearance by a male in the entire film, and it was a baby. Continue reading for some hilarious quotes from The Women. 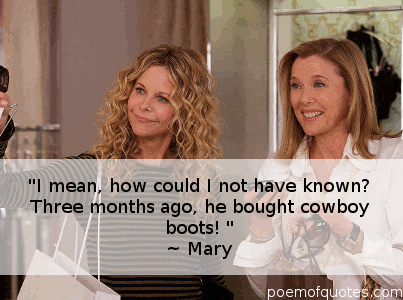 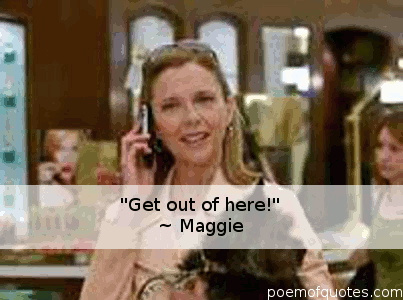 Edith: Well I might as well tell you. I'm eating for two.
Miriam Aarons: Oh for crying out loud.
Sylvia Fowler: Oh my God.
Mary Haines: What, what's happening?
Sylvia Fowler: Edi's knocked up again.
Mary Haines: Oooph.
Edith: I want to keep going until I get a boy.
Miriam Aarons: Don't we have enough of those? Sylvia: Now I'm giving you permission to behave badly. You go in there, and you kick her ass. Edith: I am so sorry that I won't be able to stay longer. My water just broke. Woman: Mrs. Haines, I don't know how you manage all the things in your life and still make time for charitable work.
Mary Haines: Oh, well pharmaceuticals. Sylvia Folwer: I wasn't going to say anything, but Mary is like my sister. This is in the vault, right? Stephen is having an affair.
Edith: Oh my GOD!
Maggie: Get out of here!
Sylvia Fowler: He's been fooling around with some girl who works behind the perfume counter.
Edith: [disgusted] The spritzer girl?
Sylvia Folwer: Yeah, can you believe that? Miriam Aarons: [after seeing the spritzer girl] Wow, she is FINE!
Sylvia Folwer: Geez Alex, not now.
Next: The Wrestler More 2000s movie quotes
Last update: 6/11/2020 - 06:22