Soylent Green is a mystery science-fiction drama-horror film that stars Charlton Heston as he investigates the government and the ingredient of "soylent green". The film takes place in a futuristic Earth where a police detective is investigated for murder when he gets too close to a state secret. Directed by Ricahrd Fleischer. Starring Charlton Heston, Edward G. Robinson, and Leigh Taylor-Young. Based on the novel "Make Room! Make Room!" by Harry Harrison. 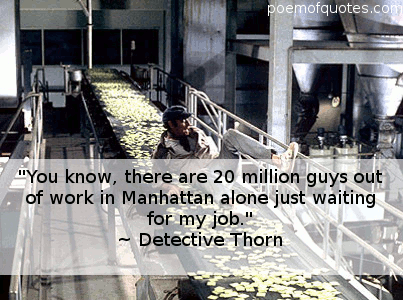 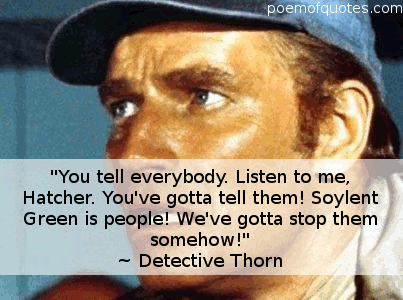 Voice over PA: First stage removal. First stage removal. Streets prohibited to non-permits in one hour. Streets prohibited to non-permits in one hour. Det. Thorn: Turn the air conditioning way up!
Shirl: Way up! We'll make it as cold as winter used to be! Det. Thorn: Who bought you?
Hatcher: You're bought as soon as they pay you a salary. Gilbert: [hesitating before killing Simonson] Uh... they told me to uh- to say that they were sorry, but that you had become... unreliable.
Simonson: That's true.
Gilbert: They can't risk, uh- catastrophe, they say.
Simonson: They're right.
Gilbert: Then, uh... this is right?
Simonson: No, not right... Necessary.
Gilbert: To who?
Simonson: To... God. Sol: Why, in my day, you could buy meat anywhere! Eggs they had, real butter! Fresh lettuce in the stores.
Det. Thorn: I know, Sol, you told me before. Hatcher: And what about the furniture?
Det. Thorn: [motions to chest] Like grapefruit.
Hatcher: [chuckles] You never saw a grapefruit.
Det. Thorn: You never saw her. Sol: There was a world, once, you punk.
Det. Thorn: Yes, so you keep telling me.
Sol: I was there. I can prove it.
Det. Thorn: I know, I know. When you were young, people were better.
Sol: Aw, nuts. People were always rotten. But the world 'was' beautiful. New Tenant: How old are you?
Shirl: Twenty-one.
New Tenant: Charles said you were twenty-four.
Shirl: That makes us both liars. Det. Thorn: You know, there are 20 million guys out of work in Manhattan alone just waiting for my job. Det. Thorn: It's people. Soylent Green is made out of people. They're making our food out of people. Next thing they'll be breeding us like cattle for food. You've gotta tell them. You've gotta tell them!
Hatcher: I promise, Tiger. I promise. I'll tell the exchange.
Det. Thorn: You tell everybody. Listen to me, Hatcher. You've gotta tell them! Soylent Green is people! We've gotta stop them somehow! Next: Star Wars: Episode IV - A New Hope Related:
A Clockwork Orange quotes
Apocalypse Now quotes
The Omega Man quotes
More 1970s movie quotes
Last update: 6/11/2020 - 06:22