Pulp Fiction is a crime thriller that follows the lives of six people as it tells the story of four violent incidents and their redemption. The movie is considered to be in many different genres, including film-noir, neo-noir, and black comedy. Directed by Quentin Tarantino. Starring Samuel L. Jackson, John Travolta, Uma Thurman, Bruce Willis, and Tim Roth.

Pulp Fiction won the Oscar award for Best Writing, Screenplay Written Directly for the Screen and was nominated for six others, including Best Actor, Best Director, and Best Picture. This movie is considered to be one of the most influential films of all-time and as such is also considered as one of the greatest movies of all-time. Read some quotes from Pulp Fiction below. 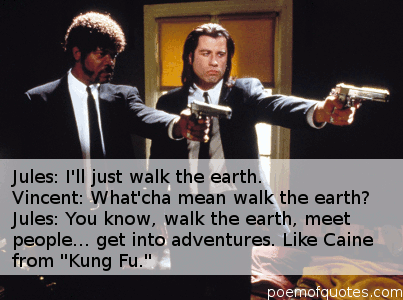 [first title card]
Title Card: pulp /'p&lp/ n. 1. A soft, moist, shapeless mass of matter.
Title Card: 2. A magazine or book containing lurid subject matter and being characteristically printed on rough, unfinished paper.
Title Card: American Heritage Dictionary
Title Card: New College Edition Pumpkin: Forget it. Too risky. I'm through doing that shit.
Yolanda: You always say that. That same thing every time, "I'm through, never again, too dangerous".
Pumpkin: I know that's what I always say. I'm always right, too.
Yolanda: But you forget about it in a day or two.
Pumpkin: Yeah, well the days of me forgetting are over, and the days of me remembering have just begun. Vincent: Get her the shot!
Lance: I will if you let me.
Vincent: I ain't fuckin' stopping you!
Lance: Well, then quit talking to me, talk to her.
Vincent: Get the shot! Jules: I'll just walk the earth.
Vincent: What'cha mean walk the earth?
Jules: You know, walk the earth, meet people... get into adventures. Like Caine from "Kung Fu." Jules: Look, do you wanna play blindman? Go walk with the shepherd. But me, my eyes are wide fucking open.
Vincent: What the fuck does that mean?
Jules: It means, that's it for me. From here on in you can consider my ass retired. Vincent: Jesus Christ.
Jules: Don't blaspheme.
Vincent: Goddamn.
Jules: I said don't do that! Maynard: Nobody kills anyone in my store except me and Zed.
[doorbell rings]
Maynard: That's Zed. Jules: Yolanda? How we doin, baby?
Yolanda: I gotta go pee! I want to go home.
Jules: Just hang in there, baby. You're doing' great. Ringo's proud of you and so am I. It's almost over. Butch: Will you hand me a towel, tulip?
Fabienne: Ah, I like that. I like tulip. Tulip is much better than mongoloid. Marsellus: In the fifth, your ass goes down. Say it.
Butch: In the fifth, my ass goes down. The Wolf: That's thirty minutes away. I'll be there in ten. Next: Reservoir More 1990s movie quotes
Last update: 6/11/2020 - 06:22