Quotations from Batman: The Dark Knight

The Dark Knight is a 2008 action-crime drama that is now seen as the best Batman movie ever made. I happen to enjoy the Adam West version, but to each his own. Either way, it is definitely in the top three and it has so many memorable moments. The film goes through the life of Batman, Gordon, and Harvey Dent as they launch an assault against the Joker and his mob. The Joker attempts to bring Gotham down once and for all, but luckily the city has the man in the suit.

Here are some great quotes from the film. 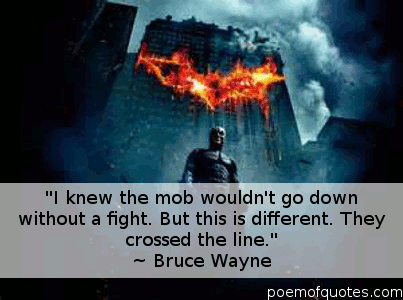 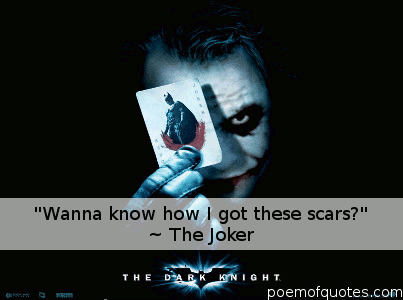 Grumpy: [before a bank heist] Three of a kind, let's do this. Chuckles: That's it, three guys? Grumpy: And two guys on the roof. Everybody gets a share. Five shares is plenty. Chuckles: Six shares, don't forget the guy who planned the job. Grumpy: He thinks he can sit out and still take a slice? I know why they call him the "Joker." Chuckles: I'm betting the Joker told you to kill me soon as we loaded the cash.
The Joker: No, no, I kill the bus driver.
Chuckles: Bus driver? What bus driver?
[a school bus drives through the wall and kills Chuckles] Happy [Alarm Guy]: So why do they call him "the Joker"?
Dopey [Safecracker]: I heard he wears makeup.
Happy [Alarm Guy]: Makeup?
Dopey [Safecracker]: Yeah, to scare people. You know, war paint. Gotham National Bank Manager: The criminals in this town used to believe in things. Honor. Respect. Look at you! What do you believe in? What do you believe in!
The Joker: I believe whatever doesn't kill you simply makes you... stranger. Harvey Dent: Alfred, right?
Alfred Pennyworth: That's right, sir.
Harvey Dent: Rachel talks about you all the time. You've known her for her whole life.
Alfred Pennyworth: Not yet, sir.
Harvey Dent: Any psychotic ex-boyfriends I should be aware of?
Alfred Pennyworth: [smiles] Oh, you have no idea. [from trailer]
Bruce Wayne: I knew the mob wouldn't go down without a fight. But this is different. They crossed the line.
Alfred Pennyworth: You crossed the line first, sir. You hammered them. And in their desperation they turned to a man they didn't fully understand. Some men aren't looking for anything logical. They can't be bought, bullied, reasoned or negotiated with. Some men just want to watch the world burn. Batman: [to The Joker] You wanted me, here I am. The Joker: Wanna know how I got these scars? The Joker: [holding a knife inside Gambol's mouth] Wanna know how I got these scars? My father was....a drinker. And a fiend. And one night he goes off crazier than usual. Mommy gets the kitchen knife to defend herself. He doesn't like that. Not. One. Bit. So, me watching, he takes the knife to her, laughing while he does it. Turns to me and he says "Why so serious?" Comes at me with the knife,"Why so serious?" He sticks the blade in my mouth. "Letâ€™s put a smile on that face!" And..... Why so serious? Lt. James Gordon: Because he's the hero Gotham deserves, but not the one it needs right now...and so we'll hunt him, because he can take it. Because he's not a hero. He's a silent guardian, a watchful protector...a dark knight. Next: Bedtime Stories