Quotations from A Christmas Story 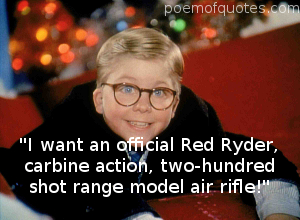 A Christmas Story is seen by some as the best Christmas movie of all-time. It shows every year on television stations around the world. It's a fantastic show for kids with a wonderful story about a little boy, Santa Claus, and a Red Ryder BB gun. The film is set in the 1940s. Based on the novel "In God We Trust, All Others Pay Cash".

Here are some great quotes from the film A Christmas Story.

Ralphie: I want an official Red Ryder, carbine action, two-hundred shot range model air rifle!
Mrs. Parker: No, you'll shoot your eye out. Ralphie as Adult: [narrating] Aunt Clara had for years labored under the delusion that I was not only perpetually 4 years old, but also a girl. Head Elf: COME ON, KID!
[pulls Ralphie]
Head Elf: COME ON!
Santa Claus: HO! HO HO!
[spins Ralphie around]
Santa Claus: HOOOO... HOOO... HOO... And what's your name little boy?
Male Elf: Hey, kid! HURRY UP! THE STORE'S CLOSING!
Head Elf: Listen little boy, we have A LOT of people waiting here, so GET GOING! [overdressed for winter]
Randy: I can't put my arms down!
Mother: Well... put your arms down when you get to school. Mr. Parker: It could be a bowling alley!
Mother: How are they going to deliver a bowling alley here tonight?
Mr. Parker: They'll send the deed for cripsake. I didn't expect them to send a whole damn bowling alley. The Old Man: [shouting] Don't anybody move! Hold it right there! The fuse is out. Ralphie: Heh, I was just kidding, even though Schwartz is getting one. I guess I'd just like some Tinker Toys.
Ralphie as Adult: [narrating] I couldn't believe my own ears. Tinker Toys? She'd never buy it. Mother: Randy? What's wrong? Whatcha cryin' for?
Randy: Daddy's gonna kill Ralphie!
Mother: No he's not...
Randy: Yes he is!
Mother: No, I promise, Daddy is not going to kill Ralphie! Mr. Parker: He looks like a deranged Easter Bunny.
Mother: He does not!
Mr. Parker: He does too, he looks like a pink nightmare! Man in Line for Santa: Young man. Hey, kid! Just where do you think you're going?
Ralphie: Going up to see Santa.
Man in Line for Santa: The line ENDS here. It begins THERE. Next: Aliens More 1980s movie quotes
More Christmas movie quotes