Funny Quotes From The Simpsons Movie (2007)

The Simpsons Movie was a long time coming after such success from the TV show. Something happens in Springfield which requires the city to be quarantined from the rest of the planet. A giant dome is put on top of the city. However, Homer, Bart, and the rest of the family just about have enough of this and seek to find a way to end it. Well, that might be the main plot, but a lot of other great things happen, like the Spider Pig!

The following are some great hilarious quotes from The Simpsons Movie. 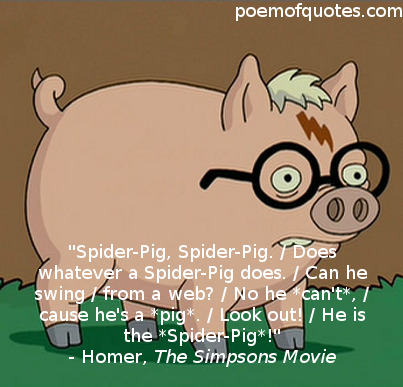 Ned Flanders: The Good Lord is telling me to confess to something...
Homer Simpson: Gay gay gay gay gay gay I'm in this office to *lead*, not to *read.*
President Schwarzenegger Homer Simpson: Did I save the day?
Bart Simpson: Actually, you've doomed us all!
Homer Simpson: D'OH! Marge Simpson: How did the pig tracks get on the ceiling?
[cuts to Homer holding a pig to the ceiling]
Homer Simpson: [singing Tune to Spider-Man Theme Song] Spider-Pig, Spider-Pig. / Does whatever a Spider-Pig does. / Can he swing / from a web? / No he *can't*, / cause he's a *pig*. / Look out! / He is the *Spider-Pig*! [while choking Bart for laughing at him] I'll teach you to laugh at something that's funny!
Homer Simpson Time to save my family!
Homer Simpson Ned Flanders: Look at that, you can see the four states that border Springfield: Ohio, Nevada, Maine, and Kentucky!
Bart Simpson: Oh yeah. [Homer is whipping his dogs]
Homer Simpson: Run! Run!
Homer Simpson: Jump! Jump!
Homer Simpson: Rest! Rest!
Homer Simpson: I know we've had a rough day, but I'm sure we can put that all behind us and...
[the dogs start attacking Homer, causing him to scream] Lisa: What are you doing bart?
Bart: Eh, just passing the time.
[Bart claps, some snow falls]
[Bart claps, creates an avelanche which covers Homer]
Homer: Awww, my boy loves Alaska so much he's applauding it! Lisa, why aren't you clapping?
Lisa: But dad!
Homer: [Pints at Lisa] Clap for Alaska!
[Avalanche shoves Homer down the mountain, into a cabin] More Simpsons quotes:
Simpsons (TV show)
124 Greatest Simpsons' Lines
Last update: 6/11/2020 - 06:22