Shrek 2 is the second film of the series. It's just as good as the original. Don't believe me? Watch it! And if you've already seen it, watch it some more. Donkey is by far my favorite character and he is back with many humorous lines and actions.

Below are some great hilarious quotations from the movie Shrek 2. 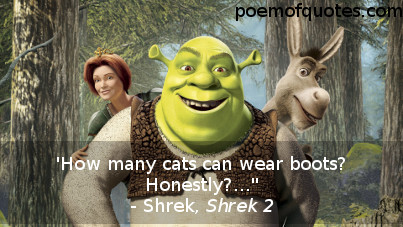 The kingdom of FAR FAR Away, Donkey? That's where we're going! FAR! FAR!... away.
Shrek Oh, Shrek. Don't worry. Things just seem bad because it's dark and rainy and Fiona's father hired a sleazy hitman to whack you.
Donkey I'm coming Elizabeth!
Donkey, before passing out Hey, boss. Let's shave him.
Puss-in-Boots, after Donkey faints I'm a real boy!
Pinocchio It looks like we're up chocolate creek without a Popsicle stick!
Gingerbread Man I'm sorry, the position of annoying talking animal has already been filled.
Donkey, to Puss-in-Boots How many cats can wear boots? Honestly?...
Shrek, to Donkey I don't care whose fault this was, just get it sorted! And could someone please bring me something deep fat fried and smothered in chocolate...
Fairy Godmother Fire up the ovens, Muffin Man! We got a big order to fill.
Gingerbread Man Shrek movie quotes:
Shrek
Shrek 3
Last update: 6/11/2020 - 06:22