Ocean's Thirteen is the sequel to the Ocean's series and a comedy-action film about loveable thieves who only steal from those who deserve it most. The great acting and the large amount of famous stars are only a couple reasons why the series was such as success. The plot twists are actually the true reason why many people still love to watch this series time and time again. The other films in the series are Ocean's Eleven and Ocean's Twelve.

The following are some great funny quotes from Ocean's Thirteen. 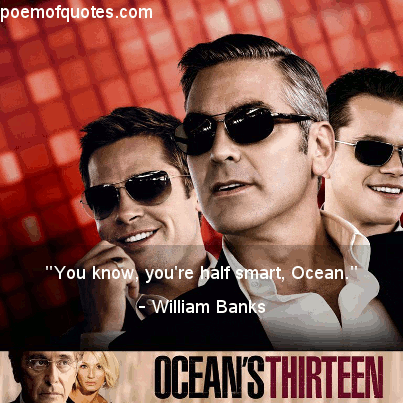 Willie Banks: This town might have changed, but not me. I know people highly invested in my survival, and they are people who really know how to hurt in ways you can't even imagine.
Danny Ocean: Well, I know all the guys that you'd hire to come after me, and they like me better than you. Terry Benedict: Think he's gonna fall for this?
Danny Ocean: You did. You ready?
Terry Benedict: I was born ready.
Danny Ocean: [rolls his eyes] Danny Ocean: I know how that makes me feel. I know what that makes me wanna do.
Rusty Ryan: I was really hoping to avoid that this time. Turk Malloy: Are you in yet?
Virgil Malloy: I hate that question. Terry Benedict: You think this is funny?
Danny Ocean: Well, Terry, it sure as shit ain't sad. Rusty Ryan: They built em smaller back then.
Danny Ocean: Yeah, but they seemed big. Rusty Ryan: Turn the machine off guys.
Turk Malloy: It is off.
Rusty Ryan: Are you kidding?
Turk Malloy: Does it sound like I'm laughing, sweetheart? Abigail Sponder: [after a small earthquake] What was that?
Linus Caldwell: You felt it too? You know, you're half smart, Ocean.
Willie Banks You're analog players in a digital world.
Roman Nagel
Last update: 6/11/2020 - 06:22