Ocean's Twelve is the sequel to Ocean's Eleven, a comedy-action film with many great actors, including Brad Pitt and George Clooney. This movie, along with the other Ocean's films, helped create a large franchise that prolonged careers and brought others to the front of the line. It's entertaining, funny, and great simply because of the fabulous acting. This movie was followed by Ocean's Thirteen.

The following are some great funny quotes from Ocean's Twelve. 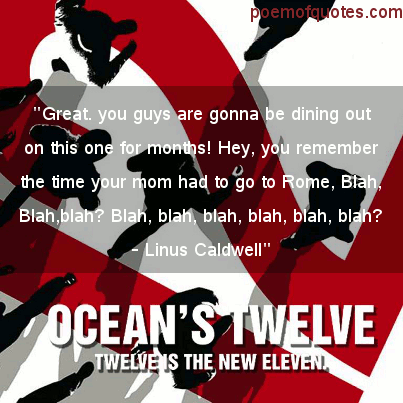 Tess Ocean: You're doing recon work on our anniversary?
Danny Ocean: Tess... Danny Ocean: Do I look 50 to you?
Basher Tarr: Yeah.
Danny Ocean: Really?
Basher Tarr: Well, I mean, you know, only from the neck up. Molly Star: I hope Danny And Rusty appreciate the fine job you did - in a tight jam? I'm really proud of you.
Linus Caldwell: Thanks.
Molly Star: We both are.
Linus Caldwell: [pauses and looks at Star]
Linus Caldwell: [revealing that Molly Star is actually Mrs. Caldwell, his mother] You told Dad? You told Dad?
Molly Star: I had to sweetheart, We were on vacation.
Linus Caldwell: [shaking his head, looks away from his mom]
Molly Star: [smiling] I'm sorry.
Linus Caldwell: Great. you guys are gonna be dining out on this one for months! Hey, you remember the time your mom had to go to Rome, Blah, Blah,blah? Blah, blah, blah, blah, blah, blah? Terry, I can't predict the future. I pay professionals to do that, and even they get it wrong sometimes.
Reuben Tishkoff Rusty Ryan: Anybody remember that scene in Miller's Crossing when John Turturro begs for his life?
Reuben Tishkoff: Sure, "Look into your heart."
[pause]
Reuben Tishkoff: I cry every time.
Danny Ocean: What?
Rusty Ryan: We have no line of sight. Terry Benedict: The last time we talked, you hung up on me.
Rusty Ryan: You used nasty words. If all the animals on the equator were capable of flattery, then Thanksgiving and Hallowe'en would fall on the same date.
Danny Ocean And tell him he dresses like a gigolo!
Roman Nagel Come on, he's one guy, and he's French.
Turk Malloy Livingston Dell: [Linus, Basher and Turk are escorted into a jail cell already holding the rest of the gang] So, how'd it go?
Last update: 6/11/2020 - 06:22