Ocean's Eleven is a fantastic comedy-action film starring many great actors, like Brad Pitt and George Clooney. During the time of this film's release, most people didn't realize it was actually a remake of an earlier version. Today, this film is now known as a huge success and has helped prolong careers of many older actors. The two other films of the series are Ocean's Twelve and Ocean's Thirteen.

The following are a few funny quotes from Ocean's Eleven. 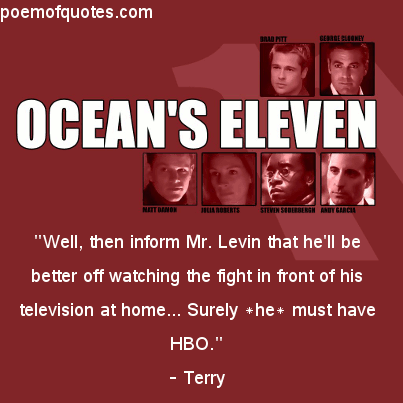 Bartender: [over the noise in the background] How's the game going?
Rusty: Longest hour of my life.
Bartender: [not hearing him] What?
Rusty: I'm running away with your wife.
Bartender: Great!
[He grins and flashes Rusty a thumbs-up] Saul: [watching Danny, Linus, and Yen load the money from the vault] That is the sexiest thing I have ever seen!
What? Did you guys get a group rate or something?
Reuben Danny: I'm not joking, Tess.
Tess: I'm not laughing, Danny. Rusty: 'Wonder what Rueben'll say.
Reuben: [Cut to Rueben] YOU'RE OUTTA YOUR GODDAMN MINDS! You of all people should know Terry, in your hotel, there's always someone watching.
Tess Rusty: Barry, your turn.
Barry Watson: Uh... four.
Rusty: You don't want four. You want to fold.
Barry Watson: I do? Is that a good thing? Well, then inform Mr. Levin that he'll be better off watching the fight in front of his television at home... Surely *he* must have HBO.
Terry Danny: All right.
[Bruiser punches Danny]
Danny: Ahh! Jesus, Bruiser, not until later!
Bruiser: Sorry Danny, I forgot.
Danny: It's all right. Shane West: Hit me.
Rusty: It's not blackjack.
Last update: 6/11/2020 - 06:22