Mr. Woodcock is one of my favorite Billy Bob Thornton films. He's such a jerk (he is in all of his films, right?) that it's awesome. Of course, the film wouldn't be what it is without Sean William Scott. He's an underrated actor who deserves some credit every now and then. The following are some funny quotes from the movie. 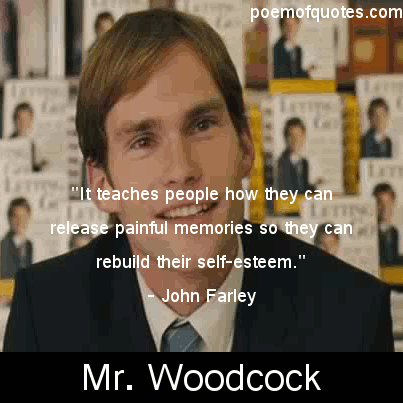 John Farley: Lets go Woodcock.
Mr. Woodcock: You must like getting spanked Farley, I guess it runs in the family. John Farley: [says quietly to Woodcock] Are you okay?
John Farly: [loudly] Rhetorical quetsion Woodcock! [slams him in the back with a chair] Maggie Hoffman: [asking the flight attendant] Could I get a real bottle please? I'm an alcoholic not a Barbie doll. Mr. Woodcock: [to a young Farley] Are you going to be a loser?
Young Farley: [wincing while doing pullup] No sir...
Mr. Woodcock: Rhetorical Farley. I already know the answer. You are a disgrace to fat, gelatinous, out of shape little kids the world over. John Farley: Are you seeing someone?
Beverly Farley: Yeah, you know him already.
[Woodcock knocks on the door] Mr. Woodcock: So what's your book about?
John Farley: It teaches people how they can release painful memories so they can rebuild their self-esteem.
Woodcock: Lot of losers out there I guess.
John Farley: What are you doin'?
Woodcock: It was dark, instinct took over.
John Farley: What about when I said it's me, it's John?
Woodcock: John's a very common name. It could be a burgler named John. Page: 1 | 2 Related:
Meet the Robinsons
Pineapple Express
The Rocker
School of Rock
Last update: 6/11/2020 - 06:22