The Fourth of July, USA's Indepdence Day, is a day filled with fireworks and barbecue. So why not also fill it with a bit of laughter? My Fourth would always include hot dogs, watermelon, and homemade ice cream. My dad would be the one to make the ice cream and we'd usually wait until after the fireworks to eat it. It was fantastic and it's a great memory.

Below are a few funny quotes about freedom and the 4th of July. 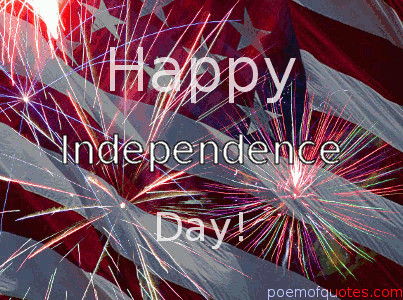 You have to love a nation that celebrates its Independence every July 4, not with a parade of guns, tanks, and soldiers who file by the White House in a show of strength and muscle, but with family picnics where kids throw Frisbees, the potato salad gets iffy, and the flies die from happiness. You may think you have overeaten, but it is patriotism.
Erma Bombeck Better to starve free than be a fat slave.
Aesop I have always been among those who believed that the greatest freedom of speech was the greatest safety, because if a man is a fool, the best thing to do is to encourage him to advertise the fact by speaking.
Woodrow T. Wilson Liberty means responsibility. That is why most men dread it.
George Bernard Shaw Patriotism is the last refuge of scoundrels.
Mark Twain There, I guess King George will be able to read that.
John Hancock, after signing the Declaration of Independence Page: 1 | 2 More holiday quotes
Last update: 6/11/2020 - 06:22