Funny Quotes From Horton Hears A Who!

Dr. Seuss was a genious in children's literature. His works will not be forgotten for centuries. This movie, Horton Hears A Who! is based off one of Seuss's greatest books. It was one of my favorites growing up and I'm sure it was one of your favorites too. Luckily, this animation turned out a lot better than some of the other Seuss films. You'll read some funny quotes from the movie below. 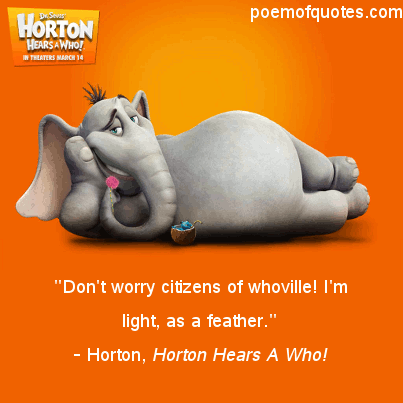 Seriously, who is this. Is this burt from accounting?
Mayor Horton: They have a mayor who has 96 daughers and one son named JoJo who all share a bathroom!
Crowd: *Gasp!*
Horton: Whatever that is. Mayor: Dr Larue, if our world was say a tiny speck. How would we know?
Dr. Larue: Well we would have unexplicable tremors, tramatic changes in the weather, and if we didn't achieve stability our world is headed for disaster.
*lightbalb pops* Mayor: Oh we're doomed. Sour Kangaroo: I want that clover devoured.
Vulture hitman: I will devour clover. Then I regurgatate it. Then I devour it second time. So two times devoured. Cool line! Usually I can't think of these things until later.
Horton Sweetheart, you need to go to bed. Daddies having a breakdown.
Sally O'Malley Even though you can't hear or see them at all. A person is a person, that is my code.
Horton Don't worry citizens of whoville! I'm light, as a feather.
Horton Related Hilarious Movie Quotes:
Corpse Bride
Hoodwinked
Kung Fu Panda
Surf's Up
Last update: 6/11/2020 - 06:22