Funny Quotes From Get Smart

Get Smart was one of my favorite TV shows to watch growing up on Nick at Night. The moment the film was announced I became extremely excited. And you know what? I loved every minute of it. Steve Carell does a fantastic job in the lead role and Anne Hathaway does a great job as lead actress. She fits the role perfectly. The Rock, on the other hand, plays the perfect villian.

Below you'll see some of the many great funny quotes from Get Smart. 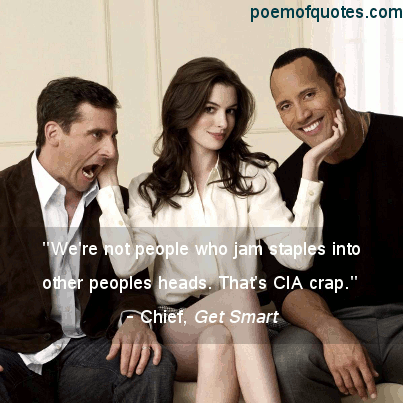 [from trailer]
Siegfried: How do I know you're not from CONTROL?
Maxwell Smart: If I were from CONTROL, you'd already be dead.
Siegfried: If you were from CONTROL, YOU'D already be dead.
Maxwell Smart: Neither of us is dead, so I'm obviously not from CONTROL.
[long pause]
Shtarker: That actually makes sense. [from trailer]
The Chief: Around the world our people are under attack. CHAOS has learned the identities of all of our field agents. They hit us and they hit us hard. Fortunately we have a new agent?
Maxwell Smart: Who's that sir?
Maxwell Smart: [after he gets recruited as a new agent] I request a cone of silence.
Maxwell Smart: [he doesn't press the button hard enough so everyone can hear him] Oh, I'm so happy! I'm so happy! This is the best day of my life!
Lloyd: You didn't press the button hard enough...
Maxwell Smart: Right. Maxwell Smart: [while being held at gunpoint] You have underestimated me and the element of SUPRAH! [throws phone, but is hooked to a cord] Sigried: My name is Sigfried and I represent Chaos. Over the past few months we have assembled a stockpile of nuclear weapons which we distributed to unstable dictators. Agent 23: We don't follow the rules then what are we?
The Chief: We're not people who jam staples into other peoples heads. That's CIA crap. Agent 99: Did you see anything?
Maxwell Smart: Just once, but I don't think you expected him to lift you so high.
Related Hilarious Movie Quotes:
40 Year Old Virgin
Space Chimps
Swing Vote
Last update: 6/11/2020 - 06:22