Movie Review: Let the Right One In

If you haven't heard of Let the Right One In you are definitely out of the loop. This film came out around the same time Twilight did, but it received much better critical acclaim and ended up winning a BAFTA for best foreign film (it wasn't eligible for an Oscar since it came out a month after the final allowed date for foreign films). 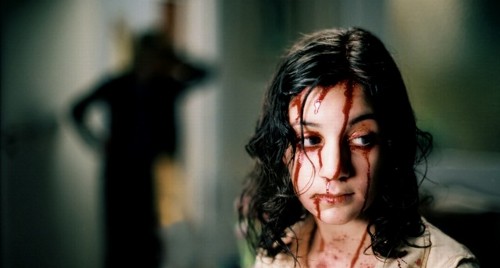 Story Line:
For those of you who haven't seen the film, here is what it is about (no spoilers):

A twelve-year-old boy name Oskar is being bullied by a group of kids his age. One day, he meets a young girl, Eli, who just moved in next door who he later finds out to be a vampire. The film goes through the troubles and hardships both Oskar and Eli must go through each day. It is a love story, a drama, and vampire film all rolled up into one.

Alright, now that you are caught up I have some spoilers to discuss. Close your eyes!

For those of you who want to know what the lump or horizontal slit was, it was where "her" penis use to be. It was cut off sometime before she was turned into a vampire, thus she/he took on female characteristics after the transformation. Also, the old man was actually, at least somewhat, her boyfriend. He was a pedophile and the book goes into great detail about his acts. So don't be sad he died!

Phew, sorry. I had to get that off my chest. It took me a very long time to find the answers to those questions. Anyway, now onto my critique!

Review:
I found the film very beautiful and very touching. Both Oskar's and Eli's characters are extremely convincing. Many times young actors and actresses seem unbelievable or forced, but these two really put on a great performance.

As for the music score, I enjoyed it. I have read other reviews containing complaints, but I thought it fit the film quite nicely. As someone close to me said during after the film, "You can tell the film is European." Which yes, you can. But this isn't a bad thing. Actually, it may very well be a good thing. Many Hollywood films are overdone, oversimplified, and the ending completely overdone. I did not find this true at all for Let the Right One In. The music fit the scene, the ending is well thought-out, and the characters are expanded upon thoroughly, but leave enough to be imagined.

Was there anything which needed to be in the film? Possibly. Eli's history could have been better explained. I know it left many viewers thinking, "huh?" at specific parts, but they weren't necessarily important to the overall plot. The old man could be better explained, but again, any imagination at all would get you the correct answer.

Stars:
Overall, the film is simply fantastic. The music, the acting, the plot are all excellent. Let the Right One In is definitely one of the best films created in 2008. Four stars!