Remakes: it's sad but the majority of what we know from television, stories, and especially movies are just a repeated version of someone else's idea from whenever ago. There isn't a lot of originality left anymore. It just seems like a game of "fancy up the original idea" to make it look like something else when it isn't lately anyways. So looking at the remakes we do have I have found a nice list of movies that, in my opinion mind you (which makes me right since this is my blog after all), that can't be remade. At least can't be remade to have the same feel or be as good.

Labyrinthâ€¦four examples: (like my play with words there, don't you?)

Yeah I'm talking the 1986 Labyrinth with David Bowie as Jareth the Goblin King. Although I can understand if someone watches the movie now for the first time it could seem a bit stupid and corny, but for those of you who have watched it before I would say most of you would agree that it's just awesome. I mean, the puppets are just so perfectly designed to the point if you don't pay attention to the main happenings you'll still catch something wiggling around in the background looking alive. The reasoning why it can't really be remade is because of a few reasons.

1. Jim Henson's Style
Although our CG technology is getting fascinating, I still don't see it being as freaking awesome as Jim Henson's puppetry (for this film among others). The puppets are 97% of the cast and seeing that in CG would ruin the feel of the whole film. Even the masquerade scene without Henson's touch would be strange in a new film. 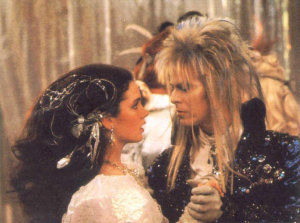 2. David Bowie
Who else could play the Goblin King? I highly doubt Justin Timberlake could fit those stuffed tights and funky hairstyle. Mentioning Justin Timberlake, I don't think he'd be up for the singing part either, at least not "Goblin King" singing.

Now I'm not saying there can never be a movie with the same story or anything like that because there definitely can be. Just everything would have to be changed except for the main story. I would highly suggest Guillermo Del Toro to do this just because I think his style would be the only one to be able to get this done. Peter Jackson and Tim Burton as runner ups.

While we're on the "fantasy" side of things another movie that is forever locked in its own, and cannot be remade the same is.

Another older film but it's just one of those classics most of us have grown up with. Sure some of it is corny but that's what makes it a classic as well. I just don't see another cast being able to pull off the same feel that the original did. I could see a reflection of the film with better graphics, but if the same lines were used and the same exact story, I just don't see it doing very well. It just wouldn't match up with the audience if it was completely remade.

The same deal really, but it's also a musical. Musicals aren't as popular as they used to be which is a huge factor but it's also the time that it came out it was immaculate. It's another factor is that the film is a bit longer than most movies that have been coming out lately, so they would have to cut a lot of scenes out and would turn it into a bloody mess. Has anyone else noticed how short some movies have gotten? We used to be able to handle an intermission for those really long movies like Gone with the Wind, Ben Hur, My Fair Lady, and Dr. Zhivago. Now it seems a hassle to most people to try to finish a two hour movie. I'm happy to hear when a long movie comes out because even if the film is complete trash--at least you get your moneys worth sitting in the theater. Well depending on the film--maybe you should ask for a refund.

Oh I could go on for hours about this film. It revolutionized so many things for the film industry--this one is the ultimate untouchable. I would think filmmakers would almost be afraid to even attempt at remaking this. It's just ultimately not needed, it's still perfect the way it is, and honestly I don't see anyone doing better. If someone took this project on, I would definitely be eager to watch. I just hope I'm surprised.

Edit: â€¦I just saw a website that claims Quentin Tarantino is going to attempt to make a Citizen Kane movie. We'll just have to see how that goes. I have a feeling that he'll have to put his usual fountains of blood somewhere. I don't recall a blood bath in the film, so I guess we'll just have to wait and see.