Top 10 Back to School Movies

Now that most students are back in school it is time to watch movies! Yes, movies about school. Why? Who knows. But what I do know is there are tons of great movies out there to please everyone. So lets get started, shall we? 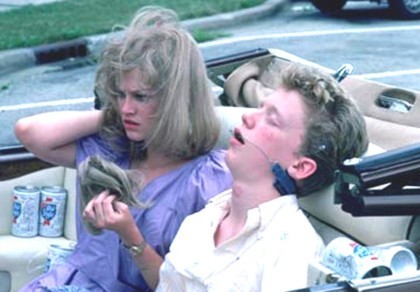 A fifteen-year-old high schooler (Molly Ringwald) has a crush on the most popular boy in school, and the dorkiest guy has a crush on her. Her sister is getting married, and with all the preparations her family forgot her sixteenth birthday.

9. Peggy Sue Got Married
A 43-year-old mother (Kathleen Turner) that's facing divorce attends a high school reunion, faints and wakes up back in high school. She realizes she has a chance to start her life over to avoid her depression and marriage to Charlie (Nicolas Cage).

8. The Faculty
In a small-town high school the teachers start changing. When Casey and Delilah hide in a closet in the teacher's lounge, they witness the death of Nurse Harper (Salma Hayek). They flee, but moments later see the nurse alive, but changed. Only six students are suspicious of what is happening. Proof of an alien invasion is brought by the chemistry teacher, who also points out a way to kill the infected humans. The plan now is to kill the queen, before the aliens infect the entire country.

7. Donnie Darko
A troubled teenager, Donnie Darko, escapes death when a plane crashes in his bedroom, because he follows a giant bunny outside. The bunny, Frank, tells him the world will end in 28 days, 6 hours, 42 minutes, and 12 seconds. Frank continues to show up in Donnie's mind, causing him to commit acts of vandalism and other crimes.

6. Grease
Danny Zuko (John Travolta) is the leader of the greaser gang "T-Birds" of Rydell High who hang out with the "Pink Ladies". He falls in love with a girl named Sandy Olsen during the summer holiday, knowing they will never see each other again. The couple re-meet at Rydell High, but Sandy doesn't fit in with the "cool" scene. The two fight against the odds and manage to stay together. When graduation comes, Sandy changes into something no one expected. Oh, and there is lots of singing and dancing.

5. Carrie
Carrie White is a shy girl with an over-religious mother. After physical education class, her classmates taunt her about her reaction to her first period. One of the girls takes pity on her and asks her boyfriend, Tommy Ross, to take her to the school prom. Meanwhile, another girl who has been banned from the prom plans to embarrass Carrie in front of the whole school. What Carrie's classmates don't realize is she has a gift, and you don't want to make her angry.

4. Back to the Future
Marty McFly tries to help out his friend Doc Brown, but ends up back in time. As a child of the 80's he has to come to grips with being in the 50's and get his parents to fall in love to keep the future from changing.

3. Ferris Bueller's Day Off
Ferris Bueller and his friends Cameron and Sloane skip school, borrowing Cameron's father's Ferrari. The principle tries his hardest to prove Ferris is faking his illness, and Ferris' sister Jeanie is frustrated that Ferris gets away with his tricks; all while Ferris is out enjoying his day.

2. Revenge of the Nerds
A group of nerds being harassed by the jock fraternity, the Alpha Betas, form their own fraternity and try to use their high-tech smarts to outwit the jocks. One of the nerds, Lewis, develops a crush on Betty Childs, a popular sorority girl and the quarterback's girlfriend. Can the nerds get revenge? Of course. That's why it's a movie. 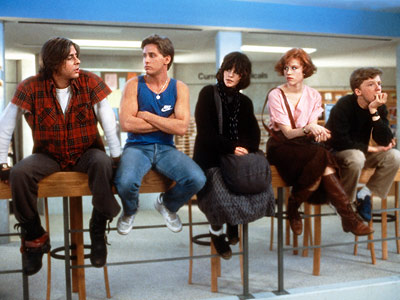 Five students with Saturday morning detention feel they are in for a long day--the principal wants them to write an essay. At the beginning they hate each other, but after smoking some marijuana they start to see the truth about each other.